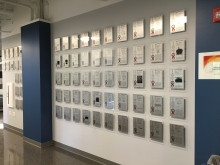 The UNHInnovation wing of Madbury Commons has a stylish new feature – a wall of plaques celebrating the University of New Hampshire’s issued U.S. patents.

Obtaining a patent gives the holder the legal right to exclude others from making, using, selling, offering to sell, and importing the patented invention, which protects their work and can help to leverage it. In order for a patent to be granted, the invention needs to be novel, useful, and non-obvious. To be classified as novel, the invention has to be different from anything else considered public knowledge. To be considered useful, the invention must serve a practical purpose. And to be non-obvious, the invention must not be easily discerned by an expert person in that particular field. Due to these qualifications, obtaining a patent can be difficult and we are excited to honor the successful innovators with this new patent wall.

There have been 79 patents issued from UNH ideas between 1961 and 2017.  The first issued patent was titled “Method of reduction with hydrocarbontin hydrides,” U.S. patent number 2,997,485, from the innovators Henry G. Kuivila (former Professor of Chemistry, College of Engineering and Physical Sciences) and Oscar F. Beumel (former Ph.D. student of Chemistry, CEPS).  The most recently issued patent, granted on June 27, 2017 is “Treatment of Anodized Aluminum Components,” patent number 9,689,064 from innovator Dale Barkey (Professor of Chemical Engineering, CEPS). UNH has nine plant patents, all from plants developed by Rosanna Freyre (former research assistant professor of Plant Biology, College of Life Sciences and Agriculture, and the creator of UNH’s ornamental plant breeding program) and just one design patent: the Tablet Pedestal, patent number D678,297, invented by Therese Willkomm (clinical associate professor, Occupational Therapy, College of Health and Human Services). The remaining 69 are utility patents, which are the most common form of patent protection.

For the patent plaques themselves, we wanted something that looked modern and contemporary to represent the cutting-edge research undertaken at the university.  We chose a design featuring clear acrylic and metal accents in a floating-style frame. Each plaque contains a figure from the invention and were designed to mirror the layout of an actual issued patent.

If you’re a UNH faculty,/staff member or student who is interested in having your work patented and want to see your name on this wall, visit our website for more information about patent-protection or feel free to reach out to UNHI at unh.innovation@unh.edu.